Just in case anyone you know still believes that the claims of the No Child Left Behind “raised academic standards” and “closed the [racial] achievement gap,” an important new report by Next America gives stark evidence that the gaps not only persist, but are widest in those cities that are otherwise “doing well.”

Next America drew on data from 150 metropolitan areas to analyze high school graduation attainment and undergraduate degree attainment by city.   The gaps between attainment by whites and Hispanics and those between whites and African Americans are represented in interactive graphs.

Although the persistence of these gaps may not be surprising to anyone aware of the growing disparities of wealth and poverty in our country (an issue not addressed in this report), several findings are worth highlighting:  Some of the “narrow” gaps between whites’ educational attainment and that of blacks are due to very low attainment by whites, not rising attainment by African Americans in the same city.

The political and cultural contexts are beyond the scope of the Next America study, but need to be filled in if we are to create schools, and communities, where all children can thrive.  For example, many of the cities with low African American and Hispanic educational attainment are in Florida, where claims of successful education reform under Jeb Bush’s governorship have led other states to adopt Florida’s “A to F” grading system for schools and reliance on standardized accountability and charter chains for “reform.”   The starving of public schools and public services by legislatures and conservatives in Congress are complicit in these gaps, but, again, not analyzed in this study.

In the words of the report,

The Next America report focuses on the implication of these “gaps” for the future of our economy.  The larger issue is whether our democracy can survive – and thrive – with so many of our youth excluded from the education they need for their personal development and their empowerment as citizens.

Posted by Linda McSpadden McNeil at 8:00 AM No comments:


Who are the children in our schools?  What does ‘diversity’ mean when we’re talking about educating children? 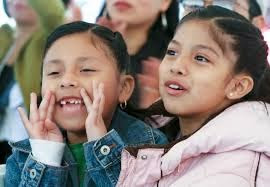 One person I rely on to teach me about the children, their families and their cultures – and the policies we need to give every child a powerful education, is Angela Valenzuela, whose blog consistently challenges our often limited vision for our schools and our teaching.

A recent post on her blog, Educational Equity, Policy and Politics in Texas, shows the need to look behind the official “diversity” categories if we want to understand our students, their families and the ways they experience school.  Most recently, Valenzuela highlights important findings on the languages spoken by people in our country officially designated as “Hispanic.”  “English Proficiency on the Rise Among Latinos,” a report by the Pew Research Center on Hispanic Trends, shows that even the languages we speak, and use on a daily basis, can’t be automatically assumed by typical demographic designations such as age, educational attainment, or country of birth.


I highly recommend the full report to anyone working in our schools or setting the policies that shape them.  These are just two of the interesting findings from their analysis of 35 years of Latinos in the US:


And of course I highly recommend Angela Valenzuela’s blog, always insightful and informative.

CINCO DE MAYO, or
Imagine how many teachers we could have hired with all that money they spent building that border fence!

All across the southwestern United States, previously known as Mexico, the fifth day of May, Cinco de Mayo, inspires parades, huge spreads of Mexican foods, margaritas of course, and vague explanations of some kind of independence day.   Actually, the day is special because the "they" is now "we." Mexicans -- both recent arrivals and those with generations of family history in "el norte" -- are, along with immigrants from Central America, becoming our new majority.   These children are the children in our schools, the coming face of the nation beyond this southwest region.

Indeed, we have much to celebrate -- and much to learn.

One cause for celebration:  finally, finally some dual language Spanish-English schools in Texas. Embarrassingly late, rarely fully funded, but immediately in high demand.

Another cause for celebration:  the always informative, insightful and unabashedly challenging blog by my colleague Professor Angela Valenzuela at the University of Texas-Austin.   A reliable and timely source for policy analysis (and monitoring of the Texas legislature), and today offering a story that explains what Cinco de Mayo is and is not, along with a creative celebration of the day by a group in Arizona.

Cinco de Mayo captures in one day the ambiguities and legacies of colonization, making us ask who is being colonized today? And who (and what) are the colonizers?   Here is one story, one answer:

"Now we make you ugly, my mother said...In the mirror I watched her move the piece of charcoal across my face.  It's a nasty life, she whispered.
It's my first memory. She held an old cracked mirror to my face.  I must have been about five years old. The crack made my face look as if it had been broken into two pieces.  The best thing you can be in Mexico is an ugly girl."

With this powerful image, novelist Jennifer Clement introduces us to the lives of girls and women in rural Mexico, tenacious in their dreams, fierce in their mutual protection, and caught in the cross-border violence of US demand and Mexico's drug cartel supply chain.   The minute I finished reading Prayers for the Stolen, I read passages a second time to hear again the voices of the girls in the Guerrero region of Mexico.  (I won't give away the name of the narrator, which completely unexpectedly evokes the British royals.)   I added it to my course syllabus and bought copies to give away.

A poetic account of courage, fear, resilience, absurdity, and hope,  and a portrait of the long shadow of colonization that carries into the lives of the youth who are our neighbors, not across an international border, but down the street and in our classrooms.

I heartily recommend you rush out to your nearest independent bookstore and grab a copy of Prayers for the Stolen -- and let me know if it raised your hopes, made you angry,  and maybe sparked your imagination for ways we can take down those border walls, celebrate a shared history and imagine a more just future.

Posted by Linda McSpadden McNeil at 11:06 AM No comments:

SOMETIMES THE TRUTH COMES OUT

The spring season of standardized testing shuts down teaching and learning, turning schools into “secured” sites of test score production. Little factories producing “indicators” for rating schools and teachers, with the children as the conscripted labor in the testing machine. This year the testing season brought an unexpected gift to parents: a kind of “Mitt Romney moment” of unintended truth. And it’s all because of the parents.

Whole weeks of testing (the STAAR, the Iowa, End of Course…..) are preceded by months and months of test drills, “benchmark” and “snapshot” tests, then more drill on answers missed. Not much time for teaching and learning.

Opposition to the tests – and their use in rating schools and teachers – has for years been voiced to Congress and to the legislators who voted for these expensive – and unproductive – testing systems, with little result. But every time, the testing company lobbyists easily drown out the voices of parents and teachers.

Parents aren’t waiting any longer. Across the country, even here in Texas where this whole thing began, parents are saying “no more.” “Not my child.” “You can’t have my child’s test score for your school rating.” They are ‘opting out,” keeping their kids home on test days.

The “opt out” movement has spread exponentially as more and more parents realize their power to act.

So how does Mitt Romney fit into this story? Remember the “47%” video? The disdain in Romney’s voice as he spoke to his rich donors about “those other people.”

Parents opting out produced a “Romney” moment of truth: it came in the form a letter from a high official in the Houston Independent School District, the district where high-stakes testing began. That letter, sent to schools and parents in the middle of the testing season, that said parents have no right to keep their kids out of testing. The writer warned of dire consequences – mandatory summer school, the risk of not being promoted to the next grade, and more.

And that “47%” connection? The district’s letter makes very plain there is no option to opt out; in fact, “Not participating in the assessments has negative consequences for the student, the school, and the district” (HISD’s emphasis). The district needs your kids’ scores.

Thanks to the Houston Chronicle’s Pulitzer-winning columnist Lisa Falkenberg and education writer Ericka Mellon, the opt out families and the district’s pushback became public news. And Margaret Downing, tireless editor of Houston Press, showed the district’s scare tactics to be just that: a score of “zero” won’t be reported for children who opt out, no child will “automatically” be denied promotion, mandatory summer school is not an automatic punishment. I urge you to read the letter for yourself, the writer’s subsequent “clarification,” and Downing’s very well informed refutation of the letter’s claims.

Sometimes the truth comes out. The “accountability” system “works” only if there are enough “data points” for rating schools and teachers. No parent wants her child to be a mere data point in the testing machine. The system has been held together by fear: fear the school scores will be low and the principal will lose his job; fear the kids scores won’t be high enough to keep the school from being outsourced to a charter chain; fear that teaching a really robust, interesting lesson won’t match the multiple choice test questions.

No longer. The David Gohl letter shows the fear has gone up the system: the fear that parents will realize they have choices. They can fight for their children.
Posted by Linda McSpadden McNeil at 11:40 AM No comments: