GUNS, SCHOOLS AND KIDS, Part 5
Guns in the hands of kids

It’s alarming to read about the number of children killed by gun violence and by gun-related accidents.  Even more alarming is that some of the time it’s children themselves, having access to firearms in the home, inadvertently committing homicides or suicide.  This disturbing trend includes very young kids....not just teenagers being harmed or doing harm to others, but small, innocent children.

According to The Trace 75 percent of children killed with guns in 2015 were under the age of 12.  In that same year, a toddler in America shot someone about once a week.  A good number of them inadvertently shot themselves.  Why would a parent, a grandparent or any responsible adult leave a loaded gun in a mom's purse, the nightstand, dad's pocket, a closet that is the perfect place for hide and seek.  This is not a hallmark of responsible gun ownership. 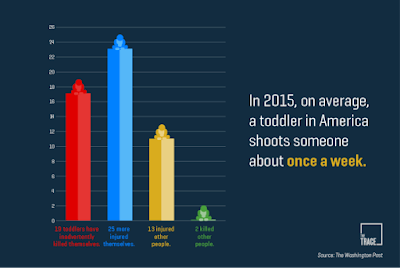 This is not just a horrifying, traumatizing epidemic, but a disgraceful rebuff of UN Declaration of the Rights of the Child, which says that we need to put in place “special provisions” to assure children’s rights to life, health, and well-being.

Some of the best teachers I’ve met and spoken with use the concept of “making good decisions” to enforce positive discipline in their classrooms.  Great teachers know kids aren’t “bad,” they sometimes make “bad choices,” and the consequences must be addressed.  But how can we expect our kids to make good choices, when the adults around them are making such poor decisions?  A child doesn’t know a toy gun from a real one (nor do some police officers, apparently) and cannot be expected to “make good decisions” when the adults around them are irresponsible.

This is not to call out gun owners as "bad parents." Rather, what we hope to say is that allowing conditions where kids could pick up and discharge a loaded gun is not the example we want to set for kids to make good choices.   Adults should bear the consequences for their bad choices, not the kids, and certainly not with their lives or their innocence.

To share your thoughts, click on the word “comments” below.
Posted by Linda McSpadden McNeil at 1:27 PM No comments:

GUNS, SCHOOLS, AND KIDS Part 4
Why Are They Surprised? 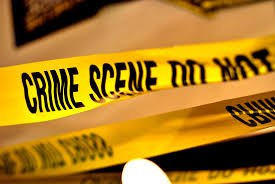 If you don’t watch the nightly news on TV, you may be missing how much gun violence there is in your city and how far that gun violence reaches into almost every age group and neighborhood.

In Houston, where I live, fully the first 10 minutes of each night’s broadcast follows a too-familiar formula:

The reporter, standing in front of crime scene tape and the blurred lights of ambulance or police cars, puts the microphone up to a distraught neighbor/teacher/mother/coach/employer/cousin/friend dismayed that such a violent act could happen in this neighborhood/park/school/shopping center/hospital/family’s home.   The victim was a great guy/a caring mom/a loyal employee/a trusted friend. The shooter is described as no one we would ever suspect/a loner/a quiet neighbor/someone always talking about his guns/an angry man/a troubled teen.  The suspect got away/is in custody/has no prior record/is well known to police/said he didn't know why he pulled the trigger.

It would be easy to dismiss these police-blotter news leads as sensational journalism.  But the shootings are too numerous, the stories too similar. The formulaic reporting is evidence of the frequency of these shootings: the daily occurrence of gun violence that takes human life, destroying the lives of the victims and their shooters.  The reporters have a formula for their stories because we have not yet come to grips as a society with the scale, scope and harm done by guns in America.  We have not created those “special protections”  of smart laws to control guns, to work out peaceful ways of resolving conflicts, to create social stability essential for protecting each other – and our communities – from a gun culture that becomes so “normal” that a reporter just has to fill in the blanks to get the latest shooting ready for the 10 o’clock broadcast.


In case we forget, here is how big the problem is and why as parents and teachers and neighbors and voters, we can’t let it continue:

To share your thoughts, click on the word “comments” below.
Posted by Linda McSpadden McNeil at 10:00 AM No comments:

Yes, it is.  It is very easy to buy silence about gun violence.  The NRA has been doing it for years.


Actually, the NRA has made the US Capitol building its marketplace and a few key members of Congress its silencer sales force.  You would never know that gun violence is a major public health crisis in this country if you checked the statistics of any state public health department or the Centers for Disease Control and Prevention.  Even though there are more gun-related deaths each year than fatal cases of the flu, you can probably find the data on the flu, maybe even displayed by location or the age of the patient.  But a search for information on gun deaths will just yield silence.

That silence has been bought and paid for by the National Rifle Association through its influence on the way Congress allocates the tax dollars for research.  From Daily Kos:

“The research 'ban' is one of the most pernicious impacts of the extremists in charge of the National Rifle Association. NRA arm-twisting led to the rider the senators talk about in the letter being passed in 1996. It was first added to an appropriations bill by Jay Dickey Jr., then a Republican Congressman from Arkansas. Congress followed up by shifting $2.6 million that the previous year had been budgeted for gun violence research into traumatic brain injury research, instead.

After that first vote, Knight-Ridder investigated and found that 75 percent of the lawmakers who backed the Dickey Amendment had received $1.6 million from the NRA that same year. Only six of the 158 members who opposed the measure had received support from the gun lobby.”

Questions:  why so little info?  No maps of gun violence, no mandated collection of data from states, or from coroners, ER's, police responding to domestic violence calls?  Why no documenting of cases of gun violence involving mental illness? no "duty to report" for pediatricians (as in the case of other forms of child abuse)?  no map of the geography of gun violence by type of weapon, source of weapon, age and circumstances of the shooter?

We don't have this information because the  NRA has found the silence easier to buy than a refrigerator.  Just like the ad says:

"Now that our [brand name] kiosk units are becoming accessible across the country, we feel it's divine intervention that our Silencer Shop mobile app is now ready for use, too. (Thank you, suppressor gods!)"


"Take your time picking the right suppressor for your needs"


"Fortunately, buying a [silencer] is a simple process that generally requires less paperwork than buying a refrigerator!"

To share your thoughts, click on the word “comments” below.
Posted by Linda McSpadden McNeil at 8:30 AM No comments: