Educational Equity, Politics & Policy in Texas: The Youngest Americans: A Statistical Portrait of ...

Many in this generation are starting out with severe economic hardship.
• Nearly half (48 percent) of America’s infants and toddlers live in low-income families (incomes less than twice the poverty line); one-quarter
(25 percent) live in families below the official poverty line.
• One in eight (13 percent) is in deep poverty (that is, their family’s income is half or less than the poverty level).
• Economic disadvantage is concentrated in the families of black and Latino infants and toddlers; fully two-thirds (66 percent) of these young
children are in low-income families.
• Nearly one in four (24 percent) black and Latino infants and toddlers live in households that are “food-insecure” (a measure of inability to
obtain sufficient healthy food).

So glad Angela brought this report to our attention.  An unfortunate reminder of unmet obligations to our children.

After you read Angela's post, I encourage you to check out this beautiful book, "I Have the Right to be a Child," which is a great way to reflect on what all children are entitled to....Read it with the child or children in your life!  Share it with teachers!  The illustrations are second only to the powerful message: 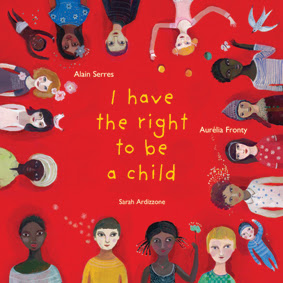 Posted by Linda McSpadden McNeil at 10:34 AM No comments:

One of my graduate students brought in his field notes from observing five sophomore English teachers at a large urban high school.  All had been teaching a lesson on action verbs, a lesson that varied only slightly from teacher to teacher.   My student and I mused on the possible efficacy of teaching action verbs de-contextualized from text – texts the students would read or themselves compose, giving action to those verbs. 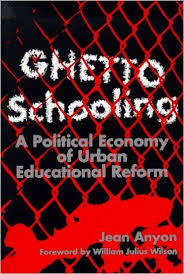 Then I thought of Jean Anyon.  In Ghetto Schooling, she taught us the importance of action verbs.   People living in poverty in Newark didn’t just happen to be poor. They, and their neighborhoods, had been pauperized. They had been made poor.  City leaders, corporate executives, and elected officials had taken actions that over many years had created structures of inequality, had moved jobs away from the central city and lowered wages for those jobs that had remained, and had shifted the investment of tax dollars into whiter, richer areas of the city.   They exercised their power through action verbs:  they pauperized those areas of the city they chose to abandon.

The life and legacy of Grace Lee Boggs remind us that action verbs – real actions – can also challenge injustice.    Grace Lee Boggs, who died this year at the age of 100, took action and inspired action. And she did so everywhere she lived and in every circumstance in which she found injustice.  Those actions included investigating and naming and making public (“public-izing”) not only injustices but the people and organizations and laws that created and benefited from them.  Her actions included writing with courage, organizing in places where the poor and oppressed had more typically been acted upon, and building new structures of possibility that would persist beyond her lifetime.

tribute to Boggs is full of the specifics of Grace Lee Bogg’s actions:  injustices encountered, creative solutions imagined, obstacles surmounted, and new alliances ever being forged to fight civic and economic injustices with unconventional voice and action.  A Chinese-American woman organizing for African American civil rights, and in the process expanding our understanding of democracy in action.

For more inspiration from Grace Lee Boggs, and for the humor and, yes, grace, she brought to all her endeavors, I hope you’ll take time to savor her interview with Bill Moyers.
Posted by Linda McSpadden McNeil at 9:00 AM No comments:

Alexandra Whittington's scenario for schools that nurture children, that foster creative ideas and embody a collective spirit that affirms a public education system in the public good seems almost too idealistic to achieve.  The onslaught of criticism against the public's schools, used to justify drastic spending cuts, which then in circular force create the very weaknesses the critics claimed is more than a cynical attack on our teachers and on our communities' schools.  What seemed to be misguided, but hopefully short-lived,  policies to standardize are in fact the strategic tools to weaken, subvert, and ultimately privatize this valued public institution, this building block of democracy.

The task to hold onto, much less strengthen and make more equitable, our public schools seems impossible.  But we are not without models of courage against unthinkable odds, people whose basic, and to them unremarkable, sense of justice moved them to action. Even when that action seemed quixotic at best, futile at worst.

Dolores Huerta is my inspiration.  If the task of holding onto and enriching our public schools for all children seems daunting, Dolores Huerta shows us what it takes when no institution is even in place to serve the public interest:  everything has to be imagined, created, protected, and then sustained even for people to have their basic rights.  Rights for farm workers to organize for fair and safe working conditions, for bathrooms and drinking water out in the fields, for protection from toxic chemicals being sprayed from airplanes only feet above the workers and the children laboring beside them. A basic right to have a voice in one's daily work -- and the power of a collective voice.

I had the extraordinary honor of meeting and spending time with Dolores Huerta when she came to Houston in 2013 to confer the Rothko Chapel's Oscar Romero Human Rights Award to a courageous young woman organizing factory workers in her native Mexico.   This past August, the capstone of my summer was attending a People for the American Way event in Santa Fe where Dolores Huerta, a member of PFAW's board, spoke passionately in defense of democracy.  She radiated optimism about what it will take to reclaim --to enact -- democracy for those who are excluded, marginalized, and systemically oppressed because of their race, geography, recentness of immigration, language or other signifier used to justify a denial of voting rights or erecting of barriers to higher education or exclusion from civic participation.  Optimism because she's seen it all before -- and she's seen what collective action can do.

I love the story of "Sí Se Puede."  This was not a pre-emptive shout of victory. And it definitely wasn't created in a consultant's focus group!   Dolores Huerta, Cesar Chavez and others from the California United Farm Workers group had been asked to go to Arizona, where worker conditions were even worse and the large agricultural owners even more intransigent, dominating a legislature and governor that not only banned organizing and strikes during the harvest season, but declared that (legally) "these people don't exist." Dolores and her colleagues were asked to assess the situation, advise on strategy, and inspire workers to keep organizing. The more they saw of the situation, the more hopeless it seemed. 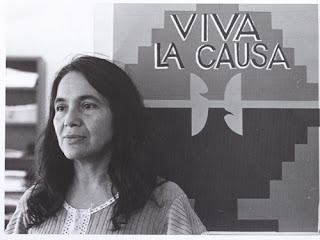 As Dolores recounts it, as Chavez fasted and workers' conditions became more dire, the overwhelming sense of futility became a chorus of "no se puede," essentially, "we can't do anything -- nothing can be done..." for the Arizona workers.  Almost as a sigh more of obligation than of hope, Dolores Huerta uttered "Yes, we can --  sí, se puede."  Her words were echoed back beyond her expectation as the Arizona farm workers shouted:"sí, se puede" and pursued their daunting course of organizing for their rights.

Now proud to declare she's in her 80's, Dolores Huerta brings her unstoppable energies to such national forces for justice as People for the American Way and to her own foundation
whose mission is the future:  specifically, working to assure an academically rich, equitable education for the youth in the Central Valley of California where she lives and confronts poverty and injustice and barriers with courage, no small amount of creativity and persistence, and always a smile and almost mischievous twinkle in her eye -- contagious courage and enduring inspiration.

We'll need no less as we pursue a vision of culturally rich, democratically governed, child-nurturing schools for our communities.  Gracias, Dolores.

Posted by Linda McSpadden McNeil at 12:38 PM No comments: