“The Children Are Our Future”: Lessons from Acoma Seed Pots 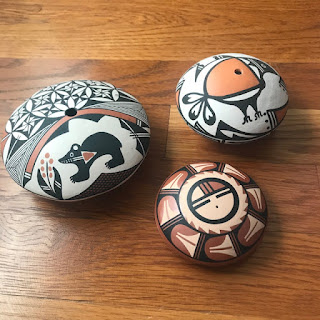 “The children are our future.”  How often have we heard – and said –  that truism?  Those few words embody the health of a society:  children, the next generations; our, the collective, the social contract; and future, continuities and possibilities.  A statement we should be able to agree on, even take for granted.  If the children are our future, we will take care of them, love them, take responsibility for them, and make sure they thrive.

A recent ruling by a federal judge reminds us we cannot take for granted that everyone cares about the children, is thinking about the future, or has our collective good at heart.  Federal District Judge Stephan Murphy III just ruled that the youth of Detroit do not – repeat, DO NOT, have a right to “access to literacy.”  The youth sued for remedy to their seriously underfunded, understaffed, under-resourced public schools:  they sued to get an education.  The judge ruled against them!

A very different, hopeful, result in New Mexico came from a state district judge who ruled in favor of plaintiffs’ claim that New Mexico’s schools are woefully inadequate, especially harmful to children with special needs, children whose first language is not English, and Native American children. The good news of Judge Singleton’s ruling – and its respect for children and their cultures – was quashed the very next day by the announcement by the Republican Governor of New Mexico that the state would immediately file an appeal rather than act on the judge’s ruling to fully fund the schools. Governor Susana Martinez does not believe the state is obligated to educate all its children.

These two rulings made me think of the tradition of protecting the “seed corn.” Every agricultural society throughout history has had some way of saving the seeds from this year’s harvest for next year’s planting. The seeds of the future. The seeds of sustenance for a family, for a community.    Among many Native peoples of the American Southwest, the survival crops are the “three sisters”:  corn, beans and squash.  In that arid climate, pots were designed to hold and protect the seeds from these essential crops to assure food for the next year. Circular in shape, wider in the middle and nearly closed on top, the pots kept out moisture, insects and critters that could destroy the seeds over the winter.  A tiny hole on top received each individual seed.

I love my collection of Acoma seed pots.  These contemporary pots are too small to carry the seeds of a harvest; instead their intricate images carry the seeds of the culture – the plants, birds, animals, rains essential to the continuity of life.   They remind us of a reverence for life, embodied in these artists themselves and in the images they so delicately produce.

Is it too harsh to imagine Judge Murphy and Governor Martinez with hammers in hand, smashing the seed pots  -- the schools, the constitutional guarantees, the institutions of justice – that our children need for their protection and nurturing if they are to carry the weight of and enjoy the possibilities of “our future”? I wish I could send every judge, every governor a beautiful seed pot from one of the Acoma potters as reminders to plan for a future made possible by protecting, and educating, the children.

Here are summaries of the judges' rulings.  If you live in New Mexico or Detroit, speak up for the children – challenge current politicians, vote for pro-education candidates in November and let them know you’ll be watching what they do after they’re sworn in.  And let them know the children are watching, too.

Detroit Ruling (June 29th, 2018)
A Michigan Federal District Court judge(U.S. District Judge Stephen Murphy III) dismissed a class-action lawsuit filed by students at troubled schools in Detroit. The suit argued that the under-performing schools in the district - predominately filled with racial minorities - were denied access to literacy due to mismanagement, discrimination, and a lack of funding. The schools suffered from pest infestations, a lack of teachers and essential resources as well as mass overcrowding.
New Mexico Ruling (July 20th, 2018)
A state district judge has ruled that New Mexico is violating the rights of at-risk students by failing to provide adequate funding for public schools. District Judge Sarah Singleton's said poor funding leaves students "in an inadequate system.".She wrote that the defendants "violated the rights of at-risk students by failing to provide them with a uniform statewide system of free public schools sufficient for their education." "Legally," Singleton wrote, "lack of funds is not a defense to providing constitutional rights."
New Mexico Government Appeal (July 24th, 2018)
The state government has appealed the ruling that New Mexico must provide more resources to public schools to ensure at-risk students receive a sufficient education. “Unfortunately, the judge missed the boat with this ruling,” state Public Education Secretary-designate Christopher Ruszkowski said late Monday, when he announced plans to appeal the decision. Teachers unions and political leaders opposed the news with the following statements.

To share your thoughts, click on the “comments” pencil.
Posted by Linda McSpadden McNeil at 8:00 AM No comments: