The Children are Watching 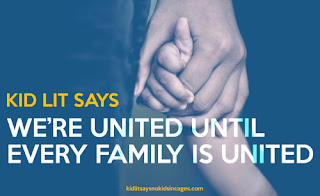 Children’s books are the best! The children in my family – and my friends’ families – always know that their gift from Aunt Linda will include at least one new book.  When a sticker on The Very Hungry Caterpillar announced "over a million copies sold,” one of my daughters asked, “Mom, how many copies of that book have you bought?!”

Well, not a million, but from Corduroy to Ten Little Fingers and Ten Little Toes and Snuggle Puppy (and of course Sandra Boynton’s Barnyard Dance), there is nothing like a wonderful children’s book to give music to a hug, pause to a tantrum, and rhythm to picking up toys or rocking to sleep.

If the writers and illustrators of books for toddlers and big kids did nothing but write and draw and paint, they should be honored with statues in town squares (in front of the library!) and boisterous parades of grateful parents and inspired children.

But “KidLit” writers are doing more: they are standing up for children. They are marching with children.  A compelling article in the September 7 New York Times by Maria Russo tells the story of writers taking action:

“When photos began circulating of migrant children separated from their parents and placed in what looked like giant cages in detention centers, the young adult novelists Melissa del la Cruz and Margaret Stohl had an immediate response.”  They texted several other author friends and drafted a statement denouncing such practices  that “should be restricted to the pages of dystopian novels.”  They gathered thousands of signatures of writers of children’s books and raised nearly $240,000 for legal services assisting the migrant children and their families. 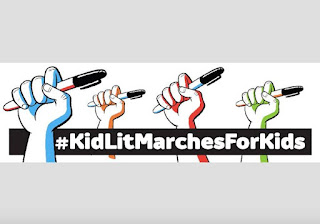 Children’s book writers had already organized “KidLit Marches for Kids,” encouraging their colleagues to join in the March 24 marches for gun control organized by the student survivors of the Parkland, Florida school shootings.  “We wanted to boost the signal of the kids,” explained one of the authors.

Boosting the signal of the kids! Not preaching to them or exhorting them or dismissing them as too young, too inexperienced, too novice to organize demonstrations across the whole country.  No, “boosting their signal.” First, listening to what the kids were saying, then taking it seriously, then marching alongside them.

Some of these authors have created a PAC dedicated to supporting Democratic candidates in state and local races, and others have established a PAC to advise “giving circles” on ways to more effectively direct their contributions in support of children.  As one publisher said, “Our life and work revolve around the children.”

Thank you, KidLit writers, for all the picture books and storybooks and chapter books we – and our kids – can’t live without. And thank you for risking your audience, your “market,” and your precious writing time to stand with and march beside and act for the children.

They, and their grateful parents and teachers, are watching.